Putting the Bier in Biergarten!

As the humid summer months begin to settle over Washington, D.C., and rooftop bars become crowded with tourists from all over the United States, I begin to reminisce about my past summer experiences in a German Biergarten in my hometown, Sankt Leon-Rot near Heidelberg.

Together with my best friend’s family, all 10 of us gathered and headed out to the Biergarten on the edge of town. We sat together with others from the surrounding community at long, rustic, wooden tables, and took delight in the evening air that was slowly settling over the countryside. The two fathers in the group both started the evening off with “Eichbaum” beers, and the mothers of the group ordered Johannisbeer (black currant) Schnaps. My friend and I both ordered Radlers to wash down the heaping amounts of spaetzle we had just ordered. Radler, also known as a shandy in the English-speaking world, is a mix of beer and a clear, carbonated lemon-lime drink. As the night began to settle in, and the luminescent outdoor lights were turned on, it seemed as if the festivities were just beginning. Some groups of guests began to sing songs, while others conversed over Angela Merkel and the current state of the European Union. My parents began to talk to others around them about the United States, and my dad commented about how much he missed the beer from the nearby “Heidelberger” brewery. Around midnight, the waitresses began clearing the tables, and we said our farewells to the people we had met. Reflecting on this experience, I realized that these nights are what remind me of Germany. Taking in the sights, smells, sounds, and the tastes of beer, and rich foods on a beautiful July evening is a quintessential experience of a German Biergarten, and what causes me to yearn for it when summer comes around. Whether your evening is spent in a large Biergarten or amongst a close group of friends, taking the time to drink and socialize is a key part of the “Feierabend” culture in Germany.

While Biergarten culture is different all across Germany, what they all have in common is the drinks that they serve. Here’s what you can expect to find on the menu at a German Biergarten.

Drinks: What to Expect in the Summer

What is Germany stereotypically known for? The obvious answer: beer. And the summer months are no exception. The summer months in Germany are primarily marked by tourists visiting German breweries and tasting all that is offered. Here are examples of five German breweries and their summer beers that are sure to delight Biergarten-goers, with a concentration on southern-German drinking trends.

In spite of the stereotype that Germans only drink beer, there are also a variety of other drinks that can be enjoyed during the summer months. Here are five other alcoholic drinks that can also be found at Biergartens around Germany. 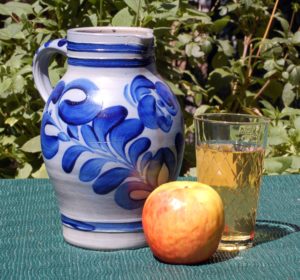 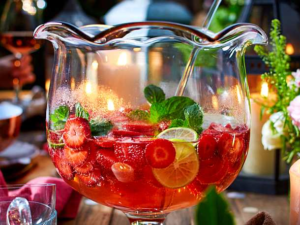 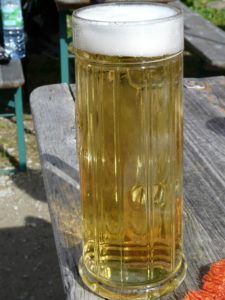 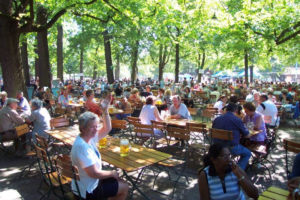