Tomorrow, October 6, is German-American Day 2018! In honor of this occasion, there will be a ceremony at the German-American Friendship Garden in Washington, DC at 10 am.

Congratulations to all German-Americans for their many contributions to our country!

German Americans have helped build our Republic, shape our heritage, and enrich our culture
since the arrival of the first German settlers in the New World on October 6, 1683. They brought
with them and instilled in their descendants a desire for liberty and dreams of a better life. Our
history is replete with examples of their commitment to civic engagement, hard work, and
invention. On German-American Day, we proudly celebrate the invaluable contributions that
Americans of German descent — the largest ancestry group in the United States — have made
to every facet of our society.

More than 43 million Americans proudly claim German heritage, linked by the shared sense of
entrepreneurship and tradition German-American pioneers have instilled in our great country.
The industry and ingenuity of German Americans shaped and continue to impact our
national landscape. They played a central role in establishing and building some of our great
American cities, including Philadelphia, Pennsylvania; Cincinnati, Ohio; St. Louis, Missouri;
Milwaukee, Wisconsin; and others. German Americans have made an indelible mark on
business, agriculture, art, design, science, technology, and education. German Americans also
have a proud history of military service, including the more than 200,000 who served in the
Union Army during the Civil War.

The deep bond between our Nation and Germany, which predates our independence,
continues today. Together, we are a cornerstone of the transatlantic alliance and champions
of economic and personal freedom. As Germany launches its yearlong German-American
friendship festival, Wunderbar Together, we proudly honor these strong historical ties and
examine how we will build on our partnership in the years to come.

NOW, THEREFORE, I, DONALD J. TRUMP, President of the United States of America, by virtue
of the authority vested in me by the Constitution and the laws of the United States, do hereby
proclaim October 6, 2018, as German-American Day. I call upon all Americans to celebrate the
achievements and contributions of German Americans with appropriate ceremonies, activities,
and programs.

IN WITNESS WHEREOF, I have hereunto set my hand this fifth day of October, in the year of
our Lord two thousand eighteen, and of the Independence of the United States of America the
two hundred and forty-third. 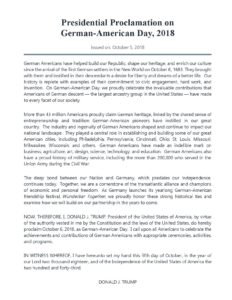